Prevention of Death through Accidents

One never closes a newspaper without reading an article on injury or death due to Road or Rail Accidents. It has become a routine news item.

According to the World Health Organization, every year 1.2 million people are known to die in road accidents worldwide. While the number injured could be as high as 50 million – the combined population of five of the world’s large cities. Every day, around the world, almost 16,000 people die from all types of injuries. No country is spared this toll in lives and suffering, which strikes the young particularly.
The rising accident rate is chiefly attributed:  Human errors,  Driver fatigue,  Poor traffic sense,  Mechanical fault of vehicle, Speeding and overtaking, Violation of traffic rules, Poor road conditions, Traffic congestion, Road encroachment due to speeding, Drunken or rash driving, Lack of staff to enforce safety measures, Absence of coordination among the connected departments/agencies  concerned — police, transport, health, roads and buildings, the  Panchayat Raj and civic bodies.
Accidental Deaths and injuries are sudden, violent, traumatic events, and their impact is long lasting, often permanent. Enormous human potential is being destroyed leading to grave social and economic consequences. In order to prevent death through accidents makro foundation is working in this area.
Our motto:  Let us join hands to make Safety on Roads everybody’s priority
Posted by Rasta- Road Accident Prevention at 23:40 No comments:

Sozzled actor, distributor arrested for road rage, Deccan Chronicle 9th Jan 2012
Film star Siva Balaji of Chandamama fame and another person associated with the film industry were caught for drunk driving by the traffic police on Saturday night. Siva Balaji was asked to undergo a breathalyser test at the traffic checking post at Bharatiya Vidya Bhavan on Filmnagar Road while driving towards his home in Manikonda in his Ford Fiesta (registration no TN41S 4701) at 12.30 am
The maximum limit of alcohol permissible is 30 mg; Balaji registered 69.2 mg. He was booked under Section 185 (drunken driving) of the Motor Vehicles Act and his car was seized.
Noted film distributor Sunil Narang of Asian Th-eatres Pvt. Ltd. was also booked for driving his Honda CRV (No AP10AN 7254) while under the influence of alcohol, the same night. He was found having 58 mg of alcohol.
He tried to obstruct and assault the policemen and used abusive language, which earned him another charge under Section 353 (assault or criminal force to deter a public servant from discharge of his duty) of the IPC. With far too many cases of drunken driving, traffic police and the courts have been following a zero tolerance policy towards the menace.
A month ago, a Nampally court suspended the driving licence of actor Nikhil for a year for drunken driving Actor Navadeep was also held for drunken driving over a year ago. He tried to give a slip to the police after spotting cops che-cking vehicles for drunken driving at Banjara Hills area. However, the police tracked down the vehicle and arrested the actor who was later produced in court and made to pay a fine.
Posted by Rasta- Road Accident Prevention at 00:02 No comments:

Every 75 minutes, a road accident takes place in the twin cities and Cyberabad

On an average, every 75 minutes, a road accident takes place in the twin cities and Cyberabad. The major hospitals get around four or five road accident cases daily.
Fatal figures
Accident prone areas in twin cities: * Abids, Goshamahal, Necklace Road, Kache-guda, Trimulgherry, Nampally, Sultan Bazaar, Panjagutta * Cyberabad areas: ORR, Rajiv Chowk-LB Nagar, Rajendranagar, Vanas-thalipuram, Hayathnagar, Shamirpet-Turkapally.
Twin cities accidents January-October 2011
Accidents: 2,237; Injured: 2,154; Deaths: 359
Cyberabad accidents
Accidents: 3,332; Injured: 3,311; Deaths: 1,075
(For details of above: http://www.deccanchronicle.com/channels/cities/hyderabad/1-mishap-every-75-mins-hyderabad-501)
"Statistics available with the Andhra Pradesh Road Safety Authority revealed that a record number of 39,000 accidents took place in the State up to 2011 November-end this year, resulting in 13,853 deaths..(According to the Hindu Article)
Day before Yesterday we lost a Ex Ministers's son so immediately the following  announcements:
by the Govt..
Will these measures help unless the youth themselves are sensitised, and behaviour change is aimed at with  parents taking  responsibility of ensuring their children also Depict Road Friendly Behaviour as the saying goes : The behaviour of the people on road depicts the general behaviour  of the city "
Posted by Rasta- Road Accident Prevention at 03:39 No comments: 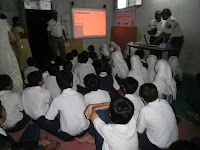 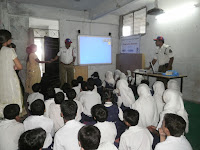 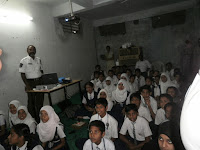 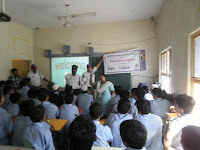 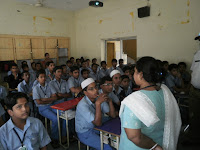 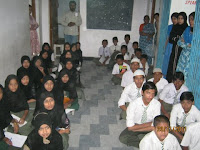 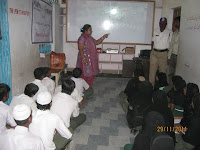 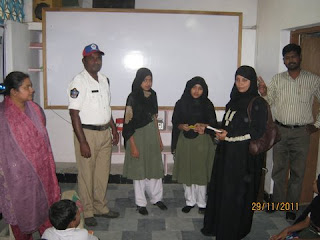 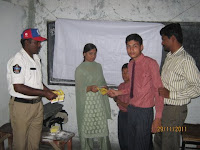 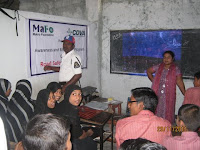 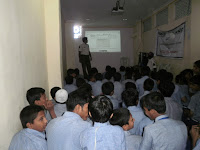 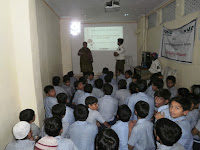 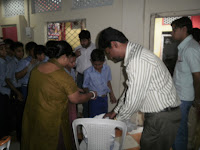 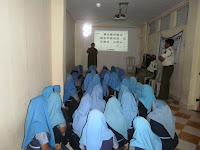 Photos of Session at School...
Posted by Rasta- Road Accident Prevention at 23:23 No comments: 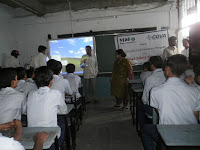 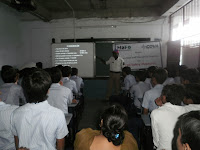 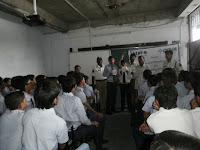 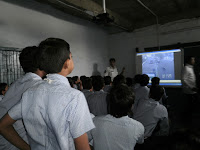 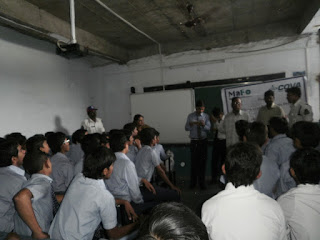